According to mainstream mass media reports, a meeting is to take place at 3pm on the 5th of February between National Unity, the High Command of the Colombian Army and the Minister of Defense, at which the coalition government of President Juan Manuel Santos will reassure the military leadership that the signing of a definitive agreement with the FARC-EP will not represent defeat for them, to ensure that they do not oppose the peace process.

«…the benefits of transitional justice would apply to both the guerrillas and the military, but on the basis of different criteria»

The calling of the aforementioned meeting is the result of another meeting held in the Presidential Palace between spokespersons of National Unity, the Defense Ministry and the President of the Republic. It was decided there that the armed forces needed protection to ensure that they would not be negatively affected by the agreements on justice reached at the Havana talks. This is what they intend to let the Generals know on the date in question.

According to public statements, in addition to legal guarantees offered to the military in a post-conflict scenario, the meeting will address issues presently under review, regarding the jurisdiction of military courts and official commitments to advance this matter, in order to silence those voices within the military who slyly show their in-conformity about the developments of the dialogue with the FARC-EP in Havana.

Likewise, senator Roy Barreras, who played a leading role at the preparatory meeting, stated to the media that the benefits of transitional justice would apply to both the guerrillas and the military, but on the basis of different criteria.

«All the above clearly demonstrates that the national government has definitive ideas about pending issues which it does not hesitate to make known publicly, even though they have not consulted with us at all»

A special chapter should apply to forces of the state. Along a similar line, senator Armando Benedetti said that a form of transitional justice that enshrined an entitlement to immunity would have to be found for the armed forces.

We have also heard declarations by the governments official spokesperson at the talks, Humberto de La Calle, referring to disagreements between FARC and government on issues of transitional justice and the effort that will have to be made to overcome them and reach an agreement. We also learned a few days ago from a press conference by general Oscar Naranjo regarding the next round of talks, the mechanisms to be implemented and how the talks should develop. All the above clearly demonstrates that the national government has definitive ideas about pending issues which it does not hesitate to make known publicly, even though they have not consulted with us at all.

«What is debatable however, is whether it is wise to do so on the basis of what might be unreal expectations»

The media are already reporting on the content of what the Technical Sub-Commission on the end of the conflict will discuss, even though the representing delegations in Havana have not yet agreed a working agenda for that same sub-commission.

Similarly, debate is being stirred about the conformation of and participation by the FARC in, a police or rural gendarme force without the subject having even been once mentioned at the Talks.

We believe that all such matters arise from attempts by the national government to calm down diverse sectors and interest groups about what a final accord might encompass.

The attitude of President Santos following his spiritual retreat in Cartagena is seemingly endeavored to evoke a national willingness to support the Havana Peace Process, which is fine. What is debatable however, is whether it is wise to do so on the basis of what might be unreal expectations.

«We are working on the assumption that the government of President Santos is clear about what it is doing, which is not to say that we do not have concerns»

In the past, the government has had such an extreme view regarding leaks of what was being discussed at the Talks, insisting on confidentiality and the un-helpfulness of public utterances regarding issues under review, that their sudden u-turn cannot fail to warrant attention; more so given their propensity to employ time-frames,electoral deadlines and a sense of urgency, in seeming attempts to pressurize us.

We are working on the assumption that the government of President Santos is clear about what it is doing, which is not to say that we do not have concerns.

It would be unfair for us not to acknowledge the official goodwill to collaborate with and even facilitate all the steps necessary for the re-composition of our delegation and integration into the Technical Subcommittee. In this regard, President Santos and other authorities have demonstrated true diligence, worthy of recognition. Although we are of the view that this same diligence might be called into question by the circulating waves of speculation regarding the issues we have referred to here. Or, for example, regarding an issue as critical as the bilateral cease-fire.

Having acknowledged our cessation compliance since the 20th of December last year, the president formally indicated that a bilateral cessation would be the object of the next round of talks. He was in reality referring to Point 3 of the General Agreement: End of Conflict, which is to say the requisite of a bilateral cease fire for the signing of a final accord, something we honestly do not perceive to yet be close at hand.

We continue to suffer permanent attacks by the regular army and the spilling of guerrilla blood – the blood of our Colombian people in struggle. It is hard to continue this way. As Comandante Fidel Castro Ruz said in a recent public message regarding the approximations of the Cuban and U.S. administrations, the defense of peace is the defense of all. All humanity is engaged in the struggle against those who make violence and wars their favorite mechanism to increase and protect their fortunes. Peace is the true aspiration of a people subjected by the secular weaponry of the propertied.

It is essential that an overwhelming majority of the Colombian people now stand up and let the ruling oligarchy know that they are not willing to continue accepting their crimes or their war. We are indeed more than willing to do politics in peaceful and civilized ways, but that will require a definitive renouncement of violent conduct and attitudes by the holders of power.

This is what is at stake in Havana and it is the cardinal dilemma that we must all resolve together.

TIMOLEÓN JIMÉNEZ, Comandante of the Central High Command of the FARC-EP 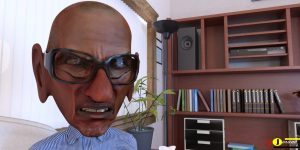 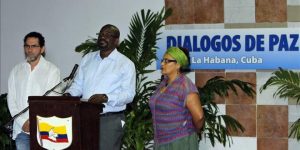 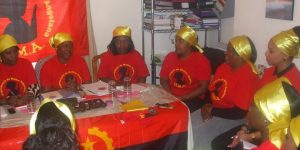